A YouTube video indicated that the Chinese Embassy in the U.S. is involved in the U.S. Riots.

The video clip at time 1:05 to 1:18 shows that protesters were throwing stones and the police fired tear gas. The host said that it was in front the White House in the evening on May 31. A Chinese voice shouted out, “Leave quickly! Leave, Leave, Leave, Leave, Leave!” (“快走！走、走、走、走、走！“)

“Major Breaking News: The Chinese military attaché is related to the White House riots! The Chinese words ‘leave quickly’ (were recorded) on the spot and (it showed that) the Chinese Consulate had arranged for the thugs presence! Clear evidence! The Chinese Communist Party (CCP) is behind the unrest in the U.S. How could (the CCP) be so unscrupulous? Is this a problem of the (communist) system? Can the U.S. government legally repress (the riots)?”

The author also posted a screenshot of a statement from WeChat that he said a netizen in Washington, DC provided to him. It was about a WeChat conversation among people at the Chinese Embassy. The conversation read as follows:

“Who shouted in Chinese on the site? Didn’t we say that (our people should) stay at the back and remain low key, and just leave after finishing (the work)?”

“Yeah, shouted very loudly. Now the video is spreading all over the U.S.”

“Military Attaché Zhang also went to the site. None of these people followed discipline.”

Radio France International also reported the “leave quickly” video. It also reported that a Tweet by account “@魏歌” said that the U.S. police arrested three Chinese students during the riot in Santa Monica, California. The students admitted that the local Chinese consulate directed them to parade along with the African Americans and stir up looting, to “carry forward their patriotism and make new contributions for the CCP and China.”

It also reported that some Chinese students posted Louis Vuitton bags on the Internet. They looted the bags during the riots. One student said, “I love the CCP and I love my motherland. The U.S. owes our China many debts. Just a few bags; they don’t need to be so stingy.”

3. Screenshot of the WeChat conversation: 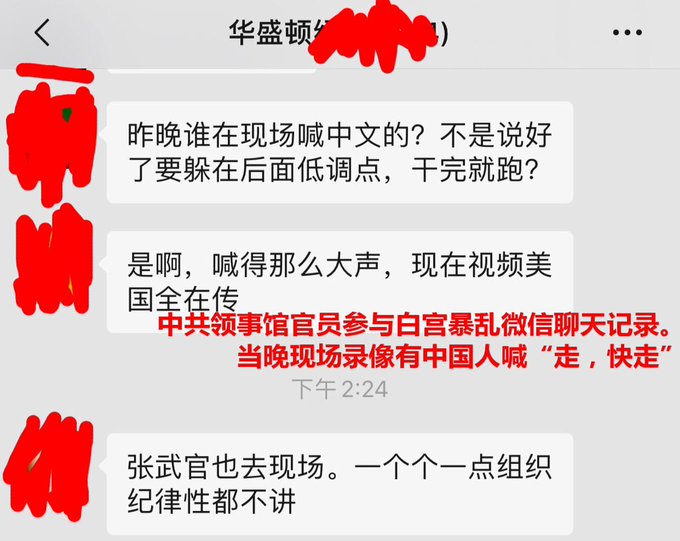