It is known that the Chinese media has been a key component in the State apparatus for directing and controlling the public, particularly in times of crisis. Recently, the Xinhua News Agency has once again been caught spreading misinformation and fabricating stories. 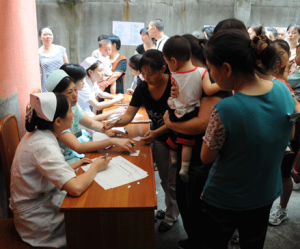 On September 19, 2008, Xinhua reported that the U.S. Food and Drug Administration (FDA) and the European Food Safety Authority (EFSA), along with the Chinese authorities, had conducted scientific evaluations on the safety margin for melamine. This was at the time when reports on melamine-contaminated milk powder were mounting daily, and tens of thousands of infants in China were undergoing treatment, were hospitalized or were already dead, having suffered as the young victims of the contamination. In its report, Xinhua stated, “According to the strictest testing standards, it is safe for an adult with an average weight of 60 kg [132 pounds] to drink less than two liters of milk with the above amount of melamine per day. To date there are no diagnosed cases of stones in the urinary system due to drinking these milk products.” [1] However, in response to an Epoch Times’ inquiry, Judy Leon, FDA spokeswoman, said they have never published information on the safety margin of melamine. [2] The FDA had instead released information warning U.S. consumers not to purchase any infant formula milk powder from China. Clearly, Xinhua’s tactic was to spread misinformation to fool the Chinese public. Because the Chinese authorities have no credibility on food safety, Xinhua had to bring in the names of the FDA and the EFSA in an attempt to add clout to its news report.

Another tactic of the authorities in China is to launch a media campaign to fan up nationalism and neutralize negative public opinion and potential social unrests. But this time, they were caught fabricating stories. While the public was still urging for an investigation of the cover-up of the tainted milk powder symptoms and effects, Xinhua, the State news agency, published on September 25 a detailed news report — but dated it September 27 — and used the headline-grabbing report to extol the success of its spacecraft orbiting in space, hours before the actual launch of the spacecraft was to take place. On September 27 at Xinhua.net, Xinhua issued a brief apology stating that it was an operational mistake. [3] The news report titled, “An Exciting Night on the Pacific: Shenzhou VII Orbits 30 Times” was written by reporters, Wu Denfeng, Mei Shixiong, and Wang Yushan. It vividly described how the astronauts received signals when the spacecraft was making its 30th circular orbit. [4] It was so perfectly written! — prior, of course, to the actual happenings. Given the state monopoly in media regarding the reporting of events of national impact in China, one cannot but wonder how much truth actually can be found in the State media reports. 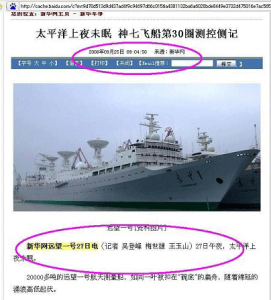 When reports of different views crop up, they are quickly smothered. State control appears to be intense when it comes to damage control regarding the State’s own image. On September 25, 2008, the government shut down China Business Post (Cai Jing Shi Bao) because it published an investigative report on government corruption and abuses at the Changde branch of the State Agriculture Bank. China Business Post announced the government ban stating that it was found to have had three violations: one, it reported non-local news; two, the reporter did not follow the formal protocol for interviews; three, it failed to “further confirm and conduct exchanges with the reported organization” before releasing “major and sensitive” reports to the public. [5]