The Chinese state media’s coverage of U.S. President Obama’s visit from November 15 to 18 can be characterized as a clear demonstration of the CCP’s dexterous use of Obama to promote what it favors while downplaying what it opposes.

Obama received a warm welcome. Not only was he offered red carpet treatment, ceremonial guards, a state dinner, and an undisturbed tour of the Forbidden City and Great Wall, but he also got tons of warm fuzzy reports in the Chinese media. Chinascope searched the Xinhua website with the Chinese translation of the President’s name Aobama. On November 17 alone, it found 90 articles. The same search resulted in 70 some articles the next day, and 47 on November 19. The number of articles far exceeds Xinhua’s daily coverage for all U.S. related reports.

The coverage runs from state activities such as meetings with Hu Jintao, Wu Bangguo, and Wen Jiabao to the exclusive series of the “Obama Couple – The Love Story of a Big Figure;” [1] from the home-cooking recipe of the state dinner that Hu Jintao hosted for Obama [2], to commentaries on seeing the easy-going demeanor of a world leader who holds an umbrella himself while walking out of Air Force One. [3]

In the business world, the wording, “Obama Concept Stock” was coined to refer to Chinese companies engaged in new energy, environmental protection, and intelligent electronic grid businesses that Obama promoted. (However, after briefly rising for a few days, in the end, the companies’ stocks retreated.) [4]

Clearly, there was an Obama hype in China. The Chinese media loved Obama. Or at least it appeared that way on the surface. But that love was a conditional love. The regime, including the media, loved Obama when he could be something that served their purpose, but when Obama advocated something the regime opposed, the media spotlight was quickly turned off, leaving Obama in the dark by himself.

During three events, Obama had the opportunity to speak directly to the Chinese people.

His first chance was at the U.S. style town hall meeting in Shanghai on November 16, during which, students could ask Obama questions at an open forum. The White House requested that the meeting be broadcast throughout China.

The meeting, though, was only broadcast by a local television station instead of nationally. While some websites had a live on-line broadcast, the quality was so bad that his speech could hardly be understood.

Some websites did publish the entire transcript of his dialogue with the students – for only 27 minutes. The transcripts were then taken down.

Only “politically trusted” students were selected to attend the meeting. Liu Yufen, 21, a student from Shanghai Jiao Tong University, said that he and other selected fellow classmates went through “training” for a whole afternoon prior to the meeting.

The authorities devised the questions ahead of time and gave them to the students to ask. Before the town hall meeting, a CNN reporter saw a student working on memorizing the question from a piece of paper. [5]

Chinese netizens criticized the questions asked by the students as being “Xiao Er Ke” – childish, a Chinese expression for something lacking in depth. [6]

For example, the first question was, “So what measures will you take to deepen this close relationship between cities of the United States and China? And Shanghai will hold the World Exposition next year. Will you bring your family to visit the Expo?”

After one person asked Obama about his winning the Nobel Prize, another person asked about it again, “I want to ask you in the other aspect that since it is very hard for you to get such kind of an honorable prize, and I wonder and we all wonder that—how you struggled to get it. And what’s your university/college education that brings you to get such kind of prizes?” 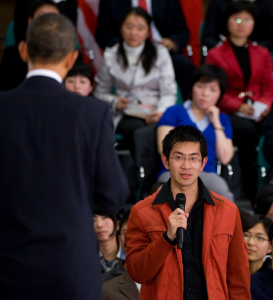 It was U.S. Ambassador Jon Hunstman, and not a student inside the hall, who chose and read the only question that pushed the regime’s limits, “In a country with 350 million Internet users and 60 million bloggers, do you know of the firewall? Should we be able to use Twitter freely?” [7]

The discovery of the “students” with Youth League credentials was posted on many blogs and forums in China, and not surprisingly, many of those posts were also immediately taken down.

Obama’s second chance was a joint press conference with Hu Jintao on November 17. Rather than follow the more Western custom of taking questions at a press conference after remarks are given, however, Obama followed the Chinese regime’s custom according to which no questions were asked.

During his meeting with Hu Jintao on November 17, Obama arranged to give himself a third chance to reach the Chinese people: he requested that he be interviewed by Nanfang Weekend, a newspaper under the Nanfang Newspaper Media Group, one of the most liberal state-owned newspapers, headquartered in Guangzhou City, Guangdong Province.

Although the questions asked were from a list provided by the Propaganda Department, this exclusive interview was still a great honor for a relatively liberal newspaper, and the Obama team felt that Obama had finally managed to find a subtle way to send his message of supporting freedom of speech. Nanfang Weekend prepared to publish the interview on November 19.

The U.S. Embassy then weighed in to pressure the Propaganda Department. Facing a diplomatic crisis, the Propaganda Department gave in – to a point. It allowed the interview to be printed, but Obama’s discussion of human rights and media freedom had to be cut out. It also forbade Nanfang Weekend to print two other complementary articles about Obama. [9]

The Propaganda Department also ordered all other media in China not to republish Nanfang Weekend’s exclusive interview. Some Chinese netizens posted a picture of a municipal order not to republish the interview on the web. The text reads as follows: [10] 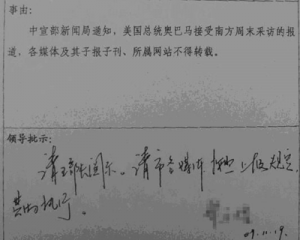 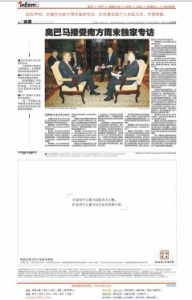 This is a rare case of a state-owned newspaper printing a blank newspaper page in protest. In the memory of many Chinese who were educated by the CCP, printing a blank newspaper page only happened in the era of the Kuomintang (the nationalist party that the CCP finally defeated in 1949 in a struggle over who would rule China). The Kuomintang had not allowed the CCP’s then Xinhua Daily to print some articles, and so Xinhua Daily printed a blank block on the front page in protest.

Although as of now, Nanfang Weekend has not been punished for this, President Obama was again muffled.

Obama’s trip is an example of the regime’s media tactics. It carefully spotlighted the events that would advance Beijing’s agenda and attempted to silence the occasions that revealed the true story. Beijing adroitly played the game of “using and muffling” President Obama this time, and will certainly play it again upon someone else when it is to their advantage.