Recent news reports revealed that the Chinese government has mandated that every PC sold in China must include a censorship program called Green Dam beginning July 1. Several computer experts from the Computer Science and Engineering Division at The University of Michigan conducted an investigation of the software and published their research Analysis of the Green Dam Censorware System on the Internet (http://www.cse.umich.edu/~jhalderm/pub/gd/).

They wrote in the report, “Green Dam scans text entry fields in various applications for blocked words, including obscenities and politically sensitive phrases (for example, references to Falun Gong). Blacklisted terms are contained in three files, encrypted with a simple key-less scrambling operation. We decrypted the contents of these files: xwordl.dat, xwordm.dat, and xwordh.dat. We also found what appears to be a word list for a more sophisticated sentence processing algorithm in the unencrypted file FalunWord.lib. When Green Dam detects these words, the offending program is forcibly closed and an error image (shown above) is displayed.”

The content of the four files mentioned above should give us a good idea about what the Chinese government does not want the people to know or see. Thanks to the University of Michigan scientists, the four text files are decrypted and downloadable, and their contents are crystal clear.

The first file, xwordl.dat, contains 253 Chinese characters. It includes a dozen pornographic words, and the rest are Falun Gong-related words.

The third file, xwordh.dat, consists of 353 Chinese characters, with about half of them pornographic the other half related to Falun Gong.

The fourth file, FalunWord.lib, is much larger than the other three. According to the “Word Count” function in Microsoft Word, there are 35,025 Chinese characters in the file. As the file name suggests, the words or phrases contained in the file are related to Falun Gong.

[Part of the file FalunWord.lib. The highlighted words are either “法轮” (Falun) or “法轮大法” (Falun Dafa) or “法轮功” (Falun Gong).]

The following is a table showing the number of occurrences of some Falun Gong related words. The figures do not include the occurrences of different variations for that term. For an example, the word”法轮” (Falun) takes the form of “[法][轮],” “l法l轮,” “X法X轮,” “Fa3(车仑),” “Fa_Lun_,” etc. Chinese people have been using those “nonstandard” variations to circumvent the government’s censorship. The occurrences of those variations are not counted. 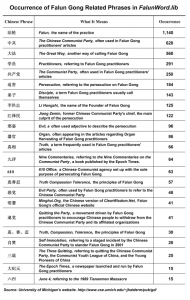 The Chinese government’s Green Dam has been putting the pornographic words side by side with Falun Gong-related terms for filtering. What stands out is the fact that the “politically sensitive phrases” referred to by the University of Michigan scientists are primarily Falun Gong terms, dwarfing other sensitive phrases such as those related to the Tiananmen massacre, the Tibetan movement, and the Taiwan independence issue. For example, in the FalunWord.lib file, there is no occurrence of “西藏” (Tibet). The occurrences of Tiananmen massacre and Taiwan independence-related phrases are far less than Falun Gong-related ones.

Footnote:
[1] Please refer to the table for a more detailed explanation of these words.