As the tension resulting from North Korea’s nuclear tests intensifies, a local Chinese government posted a recent emergency notice on the Internet.

The Environmental Protection Agency of Dalian City, Liaoning Province, issued the notice on April 14. It stated:

“To all offices in concern,

Amid the possible impact and damage to our country’s environmental security and public health from North Korea’s sudden nuclear or chemical incident, following an order from the top and according to “Liaoning Province’s Preparation Plan for Emergency Response to North Korea’s Nuclear Environment,” from today on, our city is entering an emergency response state; all related offices should organize well the emergency preparation work and start emergency on-duty shifts. All primary leaders of the related offices must maintain high political sensitivity during this emergency work. The number one lead should be on call on a 24 hour basis and keep the communication channel open so that the emergency response work can be started at the first moment when an emergency response order is given.” 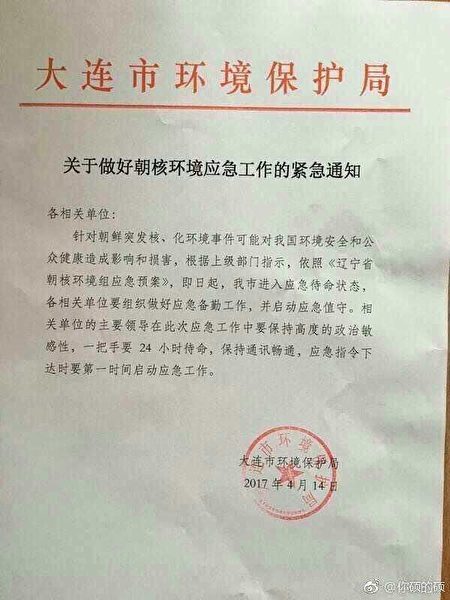