Recently, a posting that was claimed to be written by Xi Jinping’s brother, Xi Yuanping, spread on the Internet. The article defended Xi Jinping. It is doubtful that Xi Yuanping wrote the article, but it offers interesting reading on how someone could justify Xi’s actions. The following are excerpts from the posting:

I don’t want to defend my brother but I want you to understand how difficult it is to manage such a big country. He works around the clock, without any selfish thoughts. Even his most criticized action of removing the President’s two-term limitation was not for himself but rather for the stability of the country… My brother said privately, to be the top leader of the CCP, one must first be extremely “left” (holding the communist position), and then can he be extremely “right” (being open and liberal). Because being extremely “left” will allow him to establish a solid foothold in the party; after he has gained that foothold, he can start a thorough political reform… Some events that received public criticism were not based on his orders but from some other people’s digging holes for him. The handling (taking down) of a few people in the area of the Political and Legal Affairs Committee (referring to Sun Lijun, Fu Zhenghua, and maybe a few other high-ranking officials), is to clean up that garbage…  This pandemic has damaged the economy, but also offers an opportunity to start political reform. In the future, the opening of the media, public elections of city and county officials, and making the judicial system semi-independent (from the CCP), will gradually happen.

Screenshot of the article: 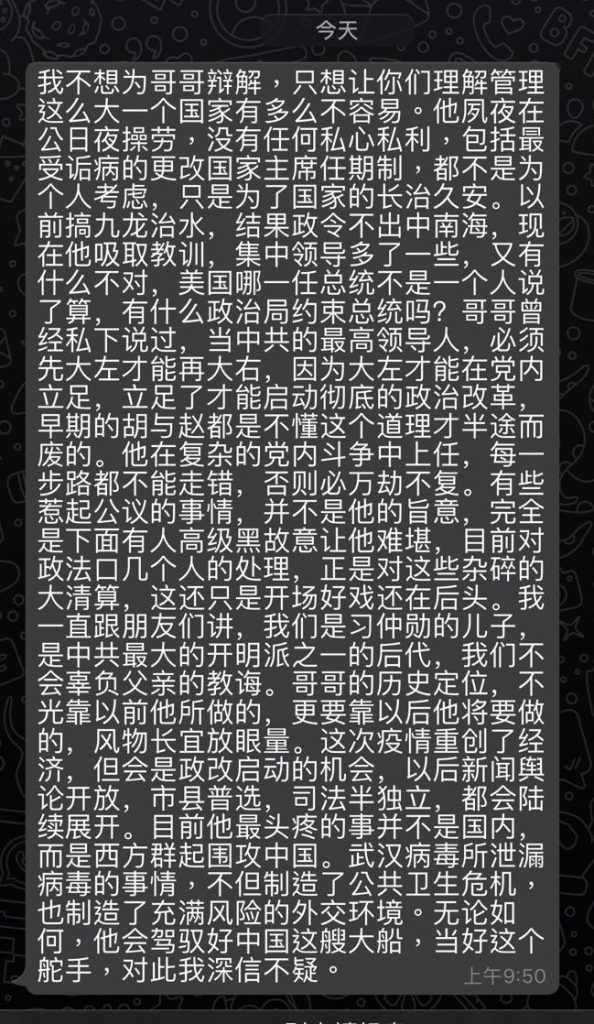