The China Media Project, according to the description on its website, is a Hong Kong based independent research, fellowship and exchange program in partnership with the Journalism & Media Studies Centre at the University of Hong Kong.

The China Media Project published a lengthy analysis of a special propaganda series that People’s Daily has been running called “The General Secretary Came to My Home” (总书记来过我的家). It has been in the newspaper as a front page story. This series, with its feel-good reminiscences has been extolling Xi Jinping as a man of the people.

The first article in this series appeared on January 5. There were five front pages that the series dominated up until January 20, the day that marked a key turning point in the epidemic. On that day, Xi Jinping made his first major statement on China’s response, which confirmed the outbreak of the coronavirus and asked governments to take action.

It then published another 12 articles, each on a different day, between January 31 and February 18. Each article in the series is very similar in style, with its tone triumphant and pleasant at turns, conveying a fulsome sense of happiness and gain, treating Xi Jinping’s every step as a miracle.

The analysis commented that, from a purely design standpoint, the series is unappealing. Every installment is designed in exactly the same way, with the series title against an orange banner, a bold vertical headline, and a gold-shaded box at the top including an inspirational quote from Xi. The series is pushed so intensely and regularly that it seems it can only fatigue the reader. The more serious problem is, however, that the series has little newsworthiness at all – at a time when everyone knows there is plenty to report, plenty to talk about, plenty to decide and to act upon.

It then asked, “Do the editors not understand that these choices will actually have an adverse impact on the image of the CCP and the image of Xi Jinping?”

[Editor’s Note: There is a Chinese term “witty sarcasm” (高级黑), meaning that someone uses praise or other seemed-to-be-supportive methods to actually ridicule another person. The overly boring praise of Xi Jinping may bring bad a public opinion to Xi. Also, to keep saying, “The General Secretary Came to My Home” may lead people to realize that Xi has not visited the epicenter of Wuhan or Hubei since the coronavirus outbreak in China.]

Image of the March 2 People’s Daily front page, with another “The General Secretary Came to My Home” on it: 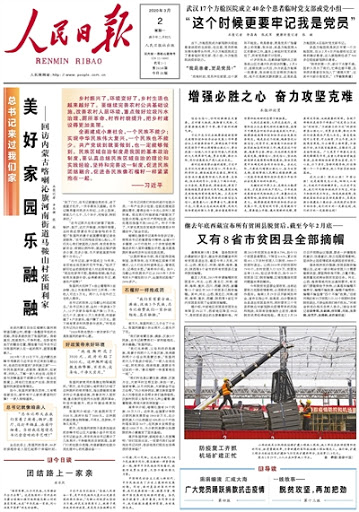 What Ails the People’s Daily?